The Unimaginative Symbols of Salim Barakat

urdish poet Salim Barakat (b. 1951, Qamishli, Syria) in 1986 published a philosophical poem entitled Haza’in Manhuba (Glimpses of Spoliation), the whole of which I have translated from the original Arabic and included as annotated appendix. Barakat writes modern secular poetry in a genre I describe as modern Islamic literature, a genre that finds its roots in the Turkic poetry of Shah Isma’il I who founded the Safavid dynasty in Persia. Barakat’s theoretical model for his philosophical poem within the aforementioned genre, and his use of meaning-making techniques of repetition is to be found in the arena of ancient Greek literature. It is, however, essentially his concept of history that affords him space to include these meaning-making poetic techniques as he strives to present to his readership an exact description of the revolts, uprisings and insurgencies that have been ongoing since the Abbasid caliphate. He explains the why and how of the wrongdoing, and the consequences on the Day of Judgment, the divine sphere of action functioning as part of his historical narrative. His symbols, in this particular poem, lean less on the Persian and Arabic Sufi poets. He rather creates symbols of his own, symbols that provide an aura of the scientific, and are as “unimaginative” as possible – being symbols of the most basic kind. As usual, his extraordinarily skilled and extensive use of devices of repetition reflect his Kurdish heritage. 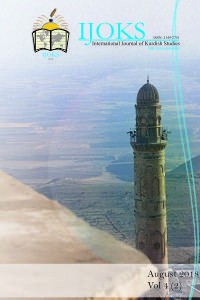