Prevalence of Existential Vacuum of Writers in the Kurdistan region- Iraq

The Existential Vacuum is one of the modern concepts in existential psychology. The idea was originally suggested by Viktor Frankl, who defined it as a negative mental state in which a person feels meaninglessness, emptiness, and distress due to an inability to acquire sufficient meaning to resist one’s boredom and despair. In the stream of life, a person usually confronts a lot of obstacles and difficulties that may hinder his or her drive to move forward in constructing his entity. Then, success may be one’s ally; if one tries to find a meaning from this suffering. Otherwise one shall fail to develop such a meaning, which leads him or her eventually to feel frustrated and endure an extended existential vacuum.

Measuring the levels of this existential vacuum in Kurdish writers is an attempt to really understand this vacuum, which, according to new developments in the fields of mental health and existential psychology, fosters a state of despair and boredom in life.

Many studies have shown the importance of this variable in the psychological construction of individuals. The current study is integral to reaching the following goals concerning Kurdish writers: 1) measure the prevalence of existential vacuum and identify statistical significance according to the hypothesis, and 2) measure the differences in existential vacuum prevalence, by age and conservation.

To reach these goals, this article utilizes a tool for measuring existential emptiness created through a review of psychological literature and standards that have been tested in this field. The study sample size reached 159 Kurdish writers from the branches of three governorates (Dahuk, Erbil, and Sulaymaniyah) in Iraqi Kurdistan. This paper comes to the following conclusions by applying its psychometric measurement tool to the acquired sample: 1) there are significant levels of decrease in existential space, after comparing their arithmetic mean with their hypothesis, and2) there are no statistically significant differences in existential vacuum prevalence between the three governorates or between age groups. 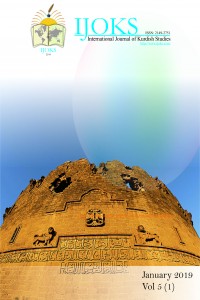